What Do You Call A Honey Bees House?

The place where beekeepers keep these beehives is called an apiary or a bee yard.

Built similar to the perennial nest occupied by colonies of honeybees in the wild, an artificial beehive consists of a specific matrix of hexagonal cells made of beeswax, known as honeycombs. These cells are used by bees to store pollen and honey ( their source of food) and to house their eggs, larvae and pupae.

The purpose of a man-made beehive is the production of honey and the pollination of crops in a nearby or distant area, because it is easily transported.

The artificial beehives have been used since ancient times, typically made of unbaked clay and straw and arranged in orderly rows, but without any internal structure, the honeybees having to create their own honeycombs.

The traditional fixed-frame beehives ( mud beehives, clay or tile beehives, bee gums and skeps) with cross-attached honeycombs, that were destroyed upon harvesting the honey, have been replaced by movable-frame beehives.

There is a large variety of such modern enclosures for honeybees, including the Langstroth beehives, national hives (square hives with rebates as hand grips and smaller frames, used mostly in the UK), commercial hives, WBC beehives, Dartington Long Deep beehives, Beehaus beehives, Top-bar and Warre beehives, some of which are patented designs.

The most commonly used types of moveable-frame beehives are Langstroth, patented in 1852 and used by almost 75% of all the beekeepers in the world and Top-bar beehives, the latter being more popular in the US and in the developing countries, because they are more cost-efficient and simpler to set up.

The prototype of removable-frame hive design, the Langstroth beehive allows honeybees to build honeycombs into frames, which are easily moved.

The frames prevent the honeybees from attaching honeycombs, making thus better use of bee space, because the honeycombs are neither connecting adjacent frames, nor cementing frames ( by using propolis)to the walls of the beehive. 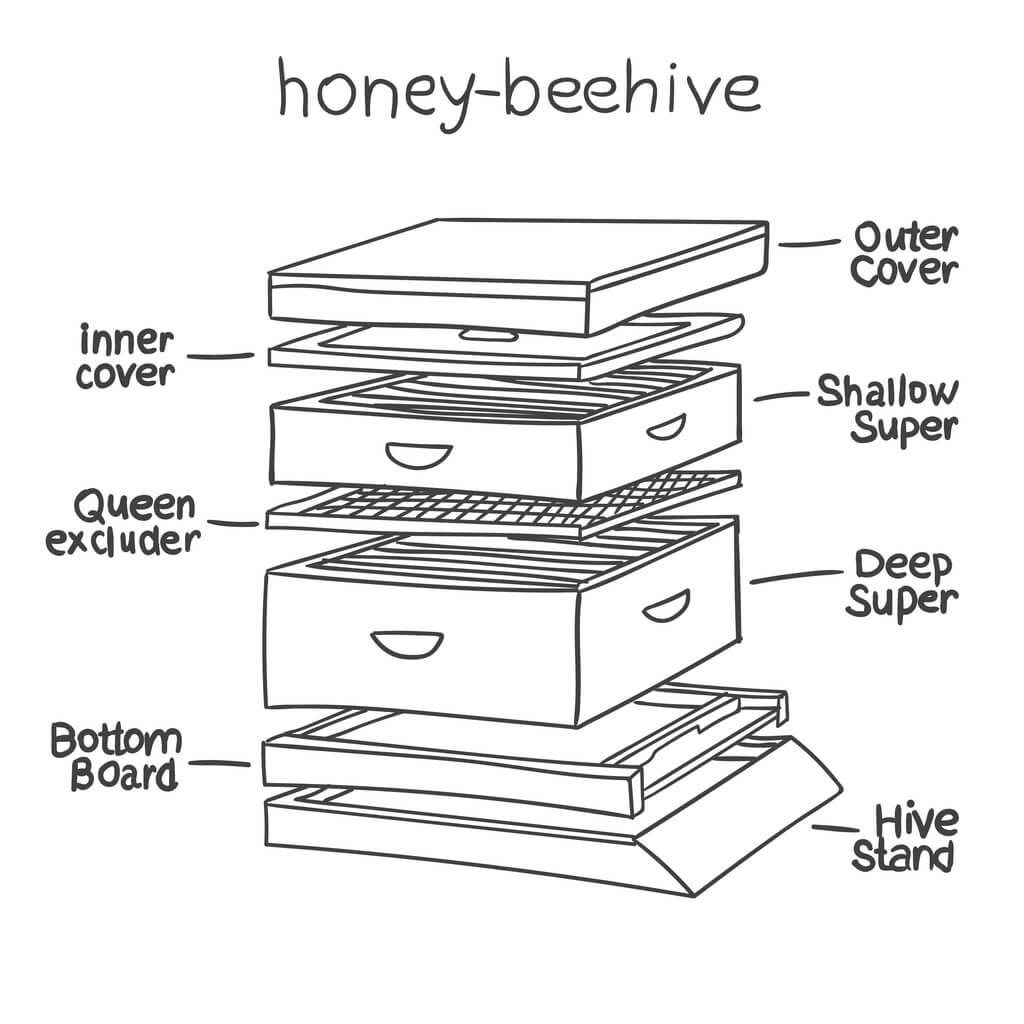 Nowadays, a modern Langstroth beehive includes a Hive Stand ( which protects the Bottom Board from cold and rot and acts as a landing board for the honeybees), the Bottom Board designed with an entrance, the Brood Box where the queen lays the eggs and the honeybees care for the larvae, the Honey Super (or beehive body), the uppermost box for honey storage, plastic or wooden frames with plastic or beeswax sheets where the honeybees build the honeycombs, an Outer Cover, to protect the colony from extremely hot or cold weather and an Inner Cover, placed between the honeybee colony and the Outer Cover and also used for feeding purposes, by pouring granulated sugar onto it, essential for honeybees during the cold season.

The Outer cover, also known as telescoping cover or migratory cover is typically made of polystyrene or wood, it is placed on top of the beehive and it does not extend beyond the sides of the beehive. A solid inner cover is required for proper insulation against extreme cold and heat, typically with a communication hole located in the middle for access to emergency food.

This inner cover also prevents the honeybees from gluing the outer cover to the bars of the honey super underneath it. Although a plastic foil can be used in temperate climates, it should not be used during harsh winters, because due to condensation, the beehives becomes wet and causes the honeybees to freeze to death.

The beehive supers or bodies are boxes with four sides and standardized interior dimensions The outside dimensions depend on the material used, typically polystyrene boxes being larger than wooden boxes.

They generally hold 8-10 frames, which in turn hold the foundation ( made of beeswax and plastic or wires) of the beehive and the built honeycomb and which rest on a rabbeted side along both ends of the box. There are four sizes of the honey super - deep body, medium or Illinois super, shallow super and comb super.

While the deep and the medium bodies serve as a brood chamber, shallow and comb as well as medium supers are used for honey storage and harvesting. If filled with honey, the deep body becomes too heavy and this is why it is generally used only for brood.

Optionally, the beehive may include a queen excluder, made of wire or plastic and set between the honey super and the brood chamber, preventing thus the queen from laying eggs in the honey super, which makes the honey darker and the extraction process more difficult.

It may also include another specialty part, the Cloake board, which allows the insertion of a sliding wood or metal panel for the purpose of splitting a beehive into two independent beehives, without lifting the beehive boxes.

In addition to the top-opened Langstroth beehive, beekeepers all over the world also use the top-bar beehives, also known as Kenya beehives, which also make use of the bee space and they represent an organic and lower-cost alternative to Langstroth beehives.

The name comes from the fact that the honeybees build their honeycomb from a top bar, (suspended across the top of a cavity) and not inside the frames. Also, the beekeeper does not have to provide beeswax for foundation where the bees built their combs, which is similar to the way they build them in a natural environment.

The hive body is shaped as a trapezoid and as opposed to the Langstroth beehive, it is expanded horizontally instead of vertically. This is a single and longer box with parallel hanging bars. It has a honey extractor located laterally and thus, the honey is not extracted by centrifuging like in the Langstroth hive.

In addition to honey, this hive produces more beeswax than the Langstroth design and the honeybees can be induced to store the honey separately from the brood areas.